During the Fringe, dining can be a frenetic affair but not so at The Radisson Blu, Edinburgh who has brought a new pop-up restaurant Burger & Fringe to the capital, for one month only in August.

A hotel restaurant wouldn’t normally be my first choice for dining as the city is awash with some great street food choices. We’ve also got some amazing restaurant choices but many of them won’t take bookings during August, so it turned out to be a good choice.

Launched in celebration of the Edinburgh Festival Fringe 2016, this new pop-up with Head Chef, Barath Kumar at the helm, uses fresh, locally sourced and seasonal ingredients to create a menu of themed handmade Scotch beef burgers and other favourites including North Sea battered cod and chips and a 28-dry aged rib eye steak.  Healthier options, with a choice of five salads, are also on offer.

With cow-skin wallpaper, in keeping with the restaurant’s other name, the Itchy Coo, my friend JA, who used to work in sales when this hotel first opened decades ago, and I were shown to a quiet corner table. It was a relaxed affair and perfect for a long catch up, before queuing for Deep Time, the International Festival’s opening performance.

There’s a choice of nine different burgers on offer, two of which are vegetarian options. Having been invited by the Radisson Blu to sample their Fringe offering, I had pre-requested if chef could make us some smaller ‘sliders’, without the burger bun (gluten free buns are available), to allow us to sample the different fayre on offer. Between both of us, we did justice to them all! 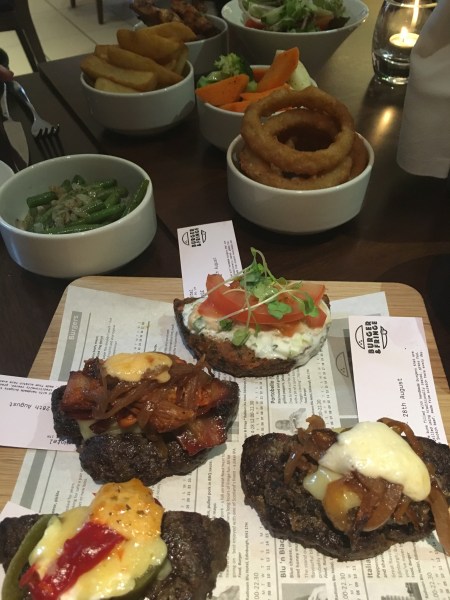 I requested smaller sliders and without the bun

The burgers arrived on wooden boards, with a humorous Fringe theatre ticket stub explaining what they each were. There’s something for everyone’s liking, even the vegetarians who can choose from their ‘Chick P‘ and ‘Portobello‘ burgers.

The Flaming Cow will appeal to those who want to spice things up with its pickled jalapenos, fresh chillies, sour cream, smoked Applewood cheddar, ketchup and harissa. The Italian Job brought the flavours of the Meditteranean to a rather wet and windy Edinburgh, with its slices of pepperoni, mozzarella, rocket, olives and shavings of Grana Padano. And then there were my favourites, the Highlander, which came complete with haggis, Scottish cheddar, fried onions and whisky mayo, and the Blue ‘n’ Black, served with blue cheese, crispy bacon, sauteed mushrooms and honey mustard mayo.

Perhaps the strangest burger on offer was the Candy & Bacon. On paper this shouldn’t work but it completely does. With Scottish cheddar, candied bacon, spicy beefy mayo and crispy fried onions, and a homemade beef patty housed in a grilled glazed ring donut, it’s worth trying, if just for the novelty factor. The saltiness complements the sweetness and I’m ashamed to say I LOVED it. Candy and Bacon Burger anyone?

The sides on offer (£6.00 for two or £3.50 each) include thick and skinny chips, sweet potato fries and beer battered onion rings. There’s even some sides, slightly kinder on the waistline, which included a mixed salad, steamed vegetables and green beans. 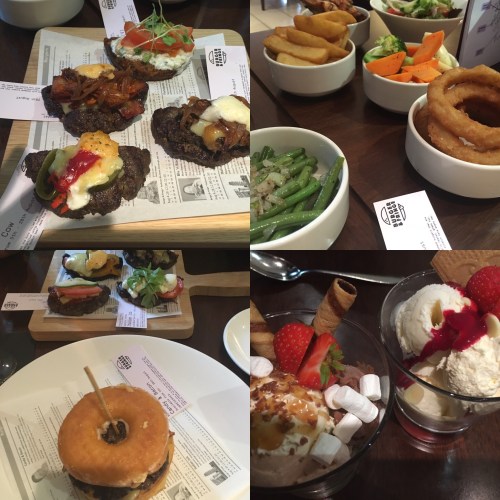 Pop into the Radisson Blu for their Burge & Fringe pop up

Whilst we were served a mixed salad, it didn’t even get touched and the steamed vegetables of broccoli, swede and carrots seemed a strange combination to accompany burgers. They were under-cooked so the broccoli florets were the only healthy bits I ate, along with the green beans, which are bathed in lots of garlic and butter and just delicious but not so healthy. Personally, I’d like to have seen some sides of coleslaw, the perfect partner for a burger in my opinion, especially if you are foregoing the bun, and some char-grilled corn on the cob.

We even found room for an ice-cream sundae, opting for a different one each from the five on offer. Again, we requested a smaller portion than the huge one traditionally served in sundae glasses. Made using ‘Mackie’s of Scotland’ ice-cream from Westertown Farm in Aberdeenshire, they need some refining. More sauce on the sundaes please!

A Mocha Ice suggests coffee ice-cream but was in fact chocolate and vanilla ice-cream and it lacked enough salted caramel sauce to make it a proper sundae. It had far too much whipped cream, which seemed to have been mixed with the double expresso rather than it being poured over the ice-cream, like an affogato. It also had strawberries in it – not a normal combination with coffee!

That aside, the evening was a fun, dining affair with some quirky choices and a great place to get far from the madding crowd during the festival. However if you are heading off to see a show, it might be worth letting the staff know as it’s a relaxed dining affair and service, although attentive, didn’t seem to be rushed – so curtains might be up before you’ve had your starter.

(Note: Burger & Fringe is only available in August during Fringe 2016)