My mother has a saying ‘nothing’s ever wasted’, which often results in remnants of food and sauces stored in Tupperware boxes to be used later, found festering in the fridge weeks later.

I think it’s a generational thing as my friends admit to their mothers doing this too. Nonetheless the principle has been driven into me and my siblings about not wasting food and I think we can all do our bit to reduce food waste. 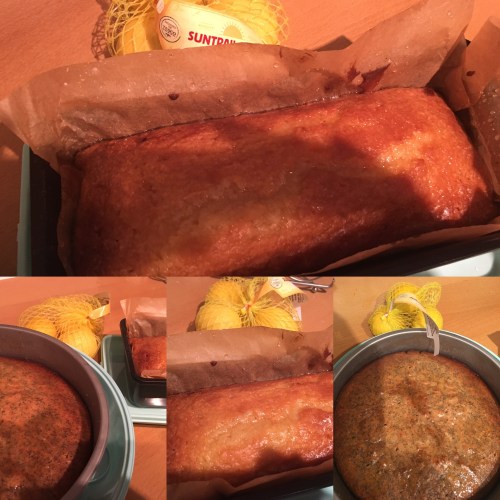 Nothing’s Ever Wasted – Cakes for Charity

Scottish households throw away 630,000 tonnes of food waste every year. In fact the average household could save themselves £460 a year by throwing away less food.

And this is how my two cakes for charity evolved. A colleague of mine has been on an egg white diet and had been throwing away the yolks into the food-waste container at work. When I discovered that all this goodness was going to waste, I asked if she would save them for me. And this is how I ended up with 16 egg yolks to use at the end of one week.

I decided to put the eggs to good use and whip up some cakes for the office and raise some sponsorship in the process, at the suggestion of one of my colleagues who is a dab hand at fundraising.

I’m taking part in Maggie’s Cultural Crawl later this month in memory of a great friend, Di Anthony, who used to come to Edinburgh annually to sell the wonderful Zimbabwean sculptures at Assembly during the Fringe. We often shared coffee (and sometimes gin) and cake during the month of August, in between visiting one of the many shows on offer. She sadly lost her battle to cancer in February, spending her last couple of weeks at St Columba’s Hospice, Edinburgh and sadly never getting to return to her beloved Zimbabwe after last year’s festival.

An internet search delivered a lot of American websites who offer advice on what to do with all the egg yolks after you’ve made Angel Food Cake, a sponge cake made with stiffly beaten egg whites with no addition of butter. Originating in the US, it first became popular in the late 19th century, gaining its reputation along with its name due to its light and fluffy texture that was said to be the ‘food of the angels’.

My particular favourite site was by Food Family from ‘Fortysomething‘ which gives 125 recipes to use up leftover egg yolks, with anything from one to 12 yolks. It also gives advice on freezing egg yolks too.

There was a bit of converting to be done as American recipes tend to use ‘sticks of butter‘ and I had a Tupperware box of broken egg yolks.They also tend to use ‘cup’ measurements. With 16 egg yolks, I opted for two different recipes, weighing out the quantities for the egg yolk. And in case you didn’t know, an average egg yolk weighs 18g.

The Lemon Pound Cake was a real winner and I will be making this again. It was light and moist and enhanced by the optional lemon glaze. It was very similar to other Lemon Drizzle Cakes I have made.

As there has been a glut of egg yolks over the last few weeks, I’ve also done a variation of this recipe – a St. Clements version, which was equally delicious, using orange juice and orange extract, in addition to the lemon flavourings. And that was before quite a few of the contestants on the Great British Bake Off had presented their offerings. 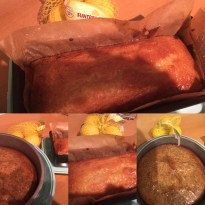 Save Print
Preparation time
15 mins
Cooking time
50 mins
Total time
1 hour 5 mins
A light moist lemon pound cake, great served with fresh strawberries and blueberries. A lemon glaze enhances this cake too.
Author: About Food
Recipe type: Baking
Cuisine: Cake
Serves: 10-12
Ingredients
Instructions
3.5.3208
The Poppy Seed Lemon Cake is what I call a pudding cake. With only 1 1/2 cups all purpose flour (plain flour) and 1/2 cup cornstarch (cornflour), and no raising agent, it was never going to rise much, so it relies on the air that you beat into the eggs. I felt it would be enhanced served with some berries and a creme fraiche or Greek yoghurt but the work colleagues seemed to polish it off with ease, without any accompaniments. I did however use up the leftover lemon glaze from the Lemon Pound Cake – as I said, nothing’s ever wasted.

If you would like to sponsor me for the Maggie’s Cultural Crawl, please follow the link to my JustGiving page.