If you’re anything like me and millions of Wagamama fans, you always order the same thing at Britain’s favourite Asian chain. Chicken katsu curry.

Opened in 1992 and now standing at 125 restaurants in the UK, Wagamama make 8,000kg a week of their bespoke katsu sauce at their central kitchen in London. That’s an impressive 70,000 portions a month.

But they’re on a mission to show their menu has much more to offer. So we visited Wagamama’s new St Andrew’s Square outlet to find out from Executive Chef Steven Mangleshot why we should venture beyond katsu. 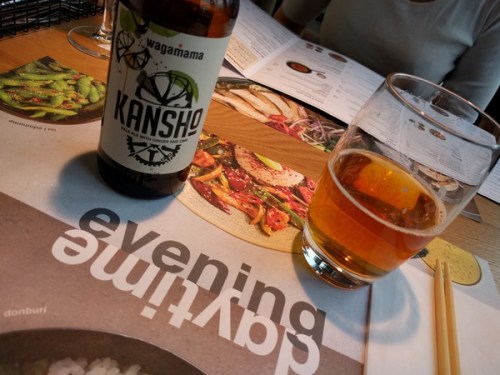 We started with grilled chicken gyoza, which are all made by hand. These chewy dumplings are always a winner with a beer to get a meal started. 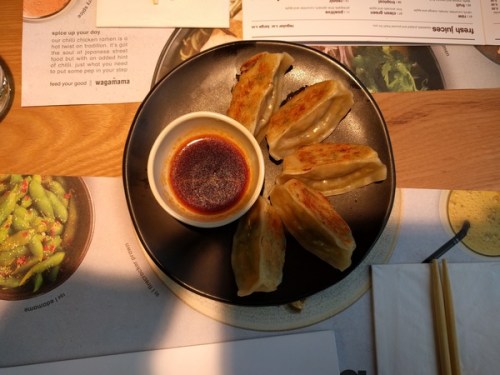 I would definitely order the lollipop prawn kushiyaki again. Marinated in lemongrass, lime and chilli, they were succulent, fragrant and flavourful. The big juicy prawns offered bang for your buck and the accompanying caramelised lime was sweet and tangy. 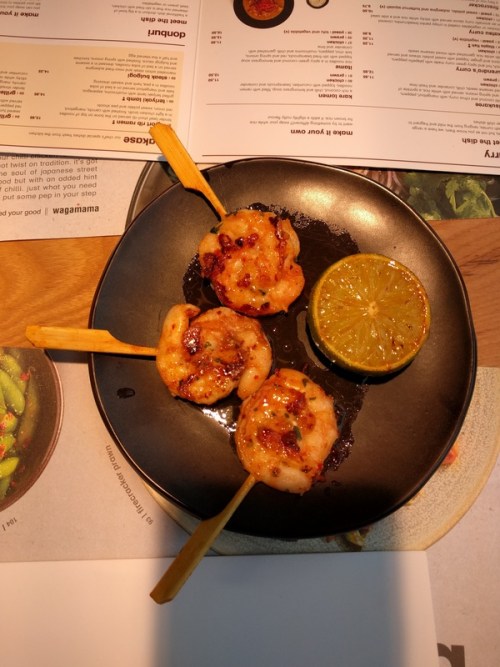 We sampled two kinds of hirata steamed bun, both deliciously fluffy. The mixed mushroom and panko aubergine was a real crowd pleaser, with lots of texture and flavour. It made an interesting change to more meat. 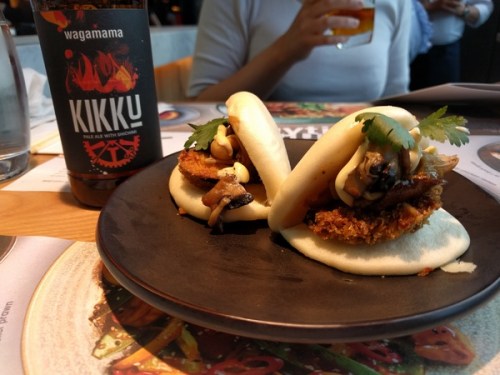 Designed to be more familiar, the pork and apple hirata bun was surprisingly sweet. However, sharing two types of bun was a great starter which I would order again. 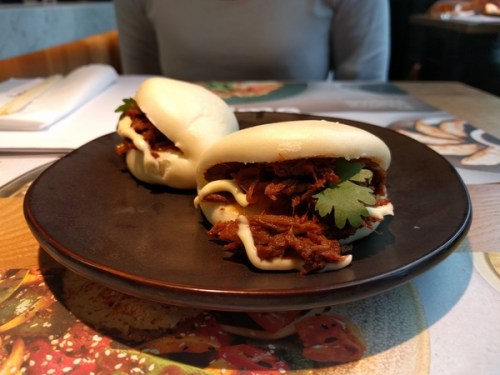 We also sampled kara age, Japan’s version of KFC. I’m a long-time fan, but I hardly ever order it. I found the dipping sauce too salty but the light batter was well-seasoned, and the chicken was very moist.

For our first main (!), we enjoyed thick chewy udon noodles with chicken and egg, topped with pickled ginger and coriander. Zingy and well balanced, I loved the texture of the noodles and fresh, fruity bite of the ginger. It’s also a safe choice for the less adventurous. 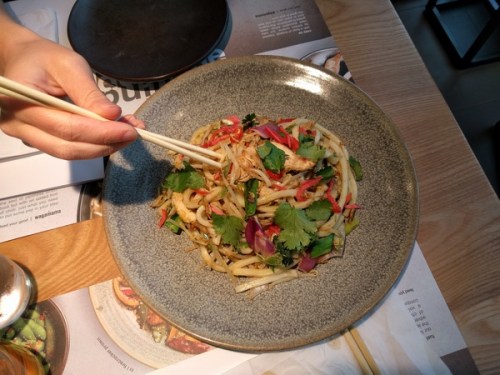 The short rib ramen was Chef’s favourite. The tender beef was very good but the broth lacked depth of flavour for me. However, it was a well-thought out dish that would draw me to the specials again.

I was also impressed to learn that all the shredded veg on top was chopped on site. In fact, all Wagamama’s ingredients are weighed and pre-portioned by the team to ensure speedy service, value for money and consistency. 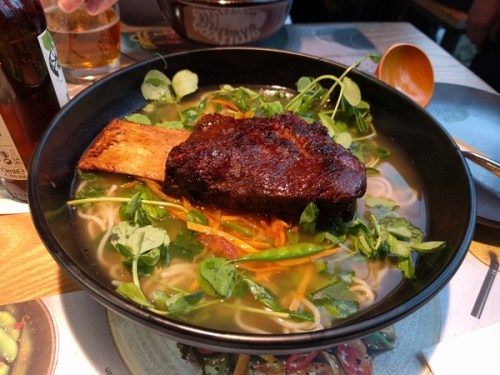 The grilled duck donburi was a truly great dish which I’ll be ordering on my next visit. I enjoyed mixing the complementary flavours into the rice. Fresh cucumber; sharp spring onion; fiery, savoury kimchi; creamy, runny yolk; sweet duck. A satisfying mouthful each time. 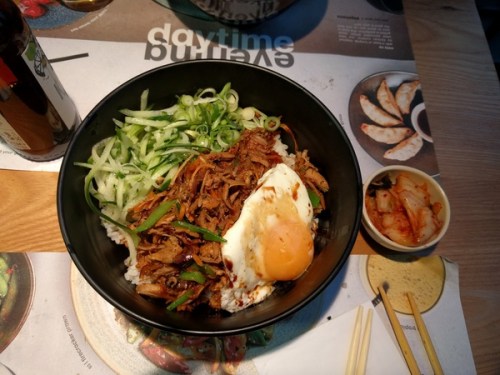 Our final main I hadn’t had before, but I enjoyed it so much I made my own the next night. An attractively colourful plate with peppers and mangetout, raisukaree is ideal if you like sweeter, less fiery curries. A basic but satisfying alternative to katsu.

I should mention our ‘special’ dessert, bizarrely moreish and destined to never appear on the menu. But who knows, perhaps if you request it…? Then you too could enjoy coconut ice cream and hot katsu sauce. I have to say, it did actually work. 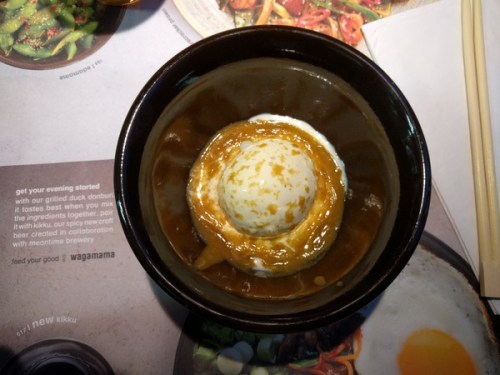 Throughout the evening we sampled two new beers by Wagamama and London’s Meantime brewery. Kikku, a pale ale with chilli, and Kansho, infused with ginger and lime, were both designed by Steven to complement Wagamama’s dishes. I preferred Kikku, for its robust flavour and gently spicy finish. 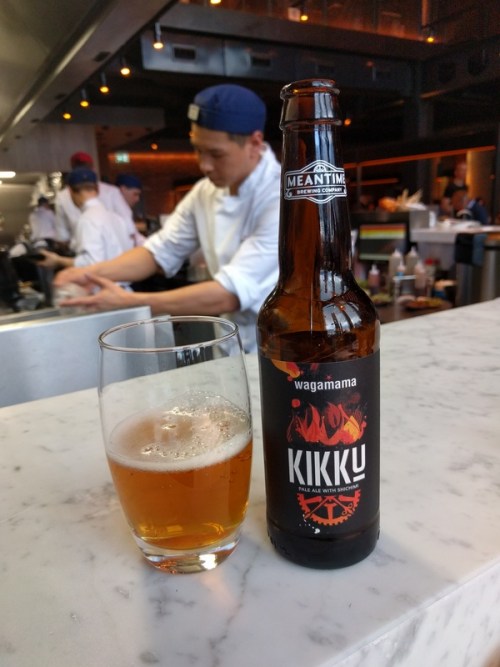 So next time you’re in Wagamama, go for it and try something new. Their passionate, focussed chefs work their fresh ingredients hard, so you can be confident of a delicious dish. Whatever you choose, you’re in safe hands.