This was our third visit to the AECC for a Brewdog Punk AGM. Partner Raymond has been an Equity Punk since early in the scheme’s launch, whilst my career with small food businesses spurred a keen interest in Brewdog’s insane growth trajectory and marketing approach. Over the years, the AGM has grown into a one-day beer festival, and I looked forward to trying some new beers, eating some great food and seeing some awesome bands. (Twin Atlantic! Yes!) 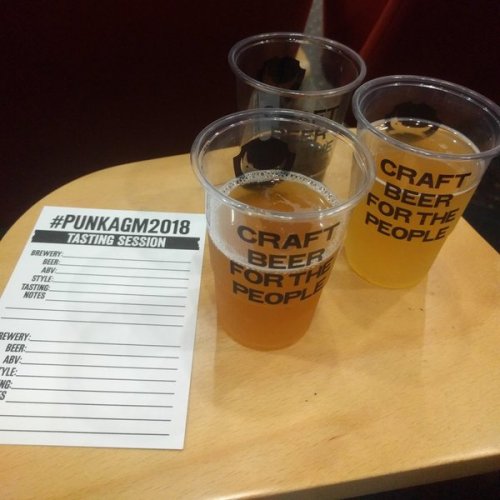 Sweet and sour, gin and beer…

The first beer I tried was a Seventh Son ‘Scientist,’ an 6.8% American IPA, brewed in Columbus. It had a bright hoppiness on the nose, but was just on the wrong side of bitter for me. So I switched to Brewdog’s Lone Wolf gin brand for a ‘Born of Obsession’ with grapefruit, honey and soda. It was refreshing and well balanced, with a ‘pop’ of juniper.

After that, I flipped between contrasting beer styles. First, a 10% imperial stout, Coffee Subliminal, by Brooklyn’s Stillwater Artisanal. Not enough coffee, and not enough body, so I was envious of Raymond’s Jet Black Heart nitro, Brewdog’s smooth, rich 4.7% vanilla milk stout poured through nitrogen. Next we explored Overworks, Brewdog’s new sour brewery, custom built to capitalise on the current trends. We tried two beers, one with Italian orange and Aberdeenshire strawberry, and one more like a chardonnay, dry and crisp. Both were very palatable and not too sour.

…so to follow I chose a Magic Rock collab, ‘Cherry Cola Vice,’ a Berliner Weisse style-beer that offered a lot of lip-smack. Cheltenham’s Deya brewery’s 4% ‘Just a Glimmer’ pale ale put things back on an even keel, before Lone Wolf’s ‘A Route Less Travelled’ with mint, lime and rhubarb soda provided a sweet finish. 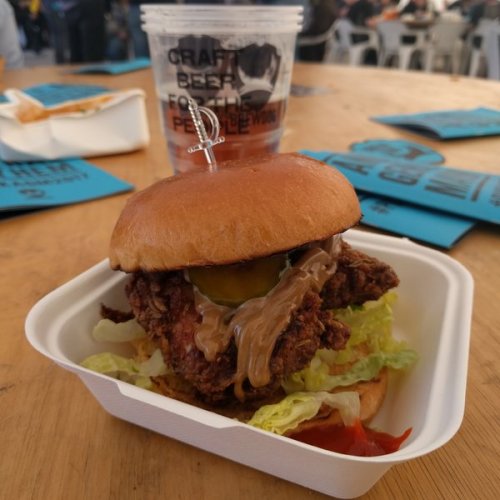 A special shout-out must go to the juicy, caramelised-looking ribs from Longhorn, but I had to have my all time favourite, the ‘Classic’ chicken burger from The Buffalo Truck. Be still my beating heart!  A chunky, succulent chicken fillet in an artfully seasoned coating packed with flavour. Deep fried to crunchy perfection, slathered with unctuous black garlic mayo and topped with thin, sour pickles, before being served between soft brioche buns. I’m dribbling just thinking about it. Raymond had the ‘Korean,’ spiced with gochujang and topped with spring onions, and it was good – but I live for that garlic mayo.

After that, Raymond had to drag me back to the beer. In other company (you know who you are), I’d have eaten rather than drunk my way around. And of course, we should have sampled more of what was on offer. But by 11pm, we’d run out of drink tokens and our vision was blurred, and we were on the bus back into town. And so it was that instead, I found myself in a Macdonald’s for the first time in a decade.

A blast from the past

Unable to confront the menu, let alone the madness of a city centre Macdonald’s at midnight on a Saturday, I ordered exactly what I had as a kid twenty-odd years ago: hamburger, small fries, chocolate milkshake. 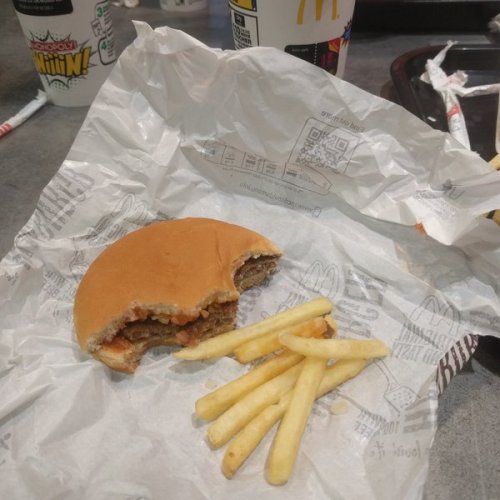 This is seemingly the dullest combination they do, producing some utterly tasteless fries – not even notably salty – to dip in very vinegary ketchup, and an absolutely tiny burger (about the diameter of my palm). A grey disc of meat, not much thicker than a pound coin, spread with red sauce and speckled with chopped onions, presumably for texture, in between dry slices of cardboard. As a child, I would remove the gherkin. As an adult, I was grateful for everything it offered – taste, mouthfeel – and wished for more. It did nothing to sate me, and the only saving grace was the nostalgia of the chocolate milkshake. It was exactly as I remembered: thick, gritty with ice, and sweet in an attempt to taste like chocolate. It was, shhhh, quite nice.

In contrast, Raymond saddled up and took on the menu. His Signature burger had tomato, lettuce and mayo, like real food, and the pattie was much thicker, darker and juicier, whilst his accompanying mozzarella dippers disappeared before I could pass judgement. Luckily, there was still enough beer in my system to take me back to the hotel, and to bed, with only a tinge of regret and dreams of Longhorn’s ribs…

Tell Amy how much you dislike Brewdog and think they’re overrated in the comments, if you like.