Say Hola to the new Mexican theme at Six By Nico

I had such fun when I visited Six By Nico when they launched with the Chippie menu that I visited twice so when I received an invitation for their new chapter, The Mexican, I jumped at the chance, even if it meant missing my fix of Aiden Turner for the evening.   Was it worth it? It most definitely was. 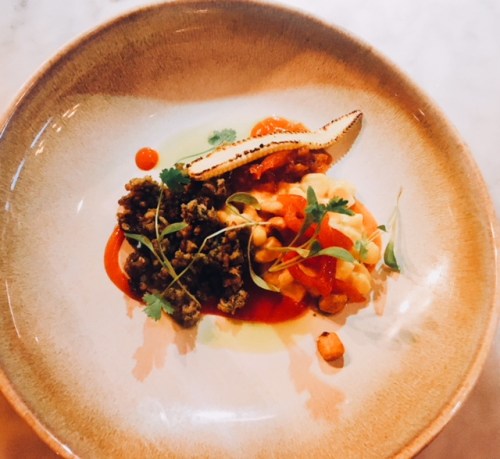 A playful concept, the menu at Six By Nico changes every six weeks.   The Mexican theme is their third, following swiftly on the heels of Willy Wonka, which I sadly missed.   Like the other times I have been the place was buzzing and with my partners in crime, The Social Bitches, who weren’t that bothered about Aiden Turner, we went along on a Sunday night for a late sitting.

Inspired by the country’s extensive and sophisticated culinary culture “Mexico” aims to transport diners from the hazy cactus deserts of Tijuana to the vibrant, bustling streets of Mexico City with each course. This six-course tasting menu, rich in colour, flavour and kick combines elements of both contemporary Mexican street food and ancient culinary classics to provide guests with a taste of the country’s flavourful history.

The matching wines are such good value

Two of us started with a cheeky Pineapple & Basil Margarita made with tequila, Cointreau and ginger, which was probably not required on a school night but we reckoned would set us up for the Mexico theme.   Any excuse, heh!    The pineapple was the dominant flavour and to be honest, I couldn’t taste the basil but it was nonetheless nicely balanced when drank through the salted rim of the glass. 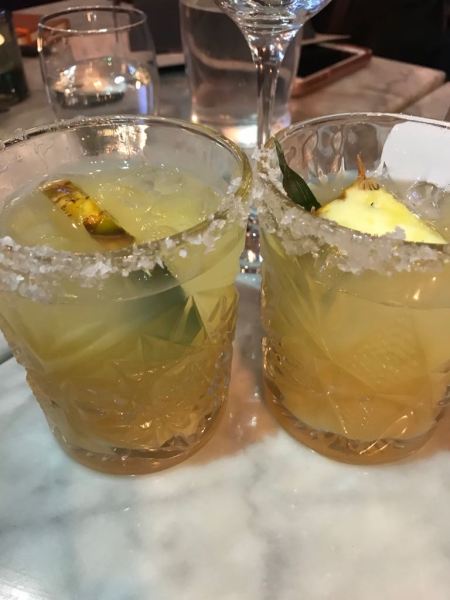 Pineapple martini – don’t mind if I do, even if it was a school night!

We opted for the matching wines at £25 which buys you five tasting glasses of wines matched with the food.  Each of the courses and wines was lovingly described by our delightful waitress Carys, but sadly the buzz of the place and the noise level meant that we were all struggling to make out what she was actually saying.   Thankfully the helpful postcard sized menu you can take home with you was a helpful addition to her description and helped us decipher what we were eating.  The food was definitely doing the talking on this occasion, with the flavours, combinations and textures setting our taste buds alight. 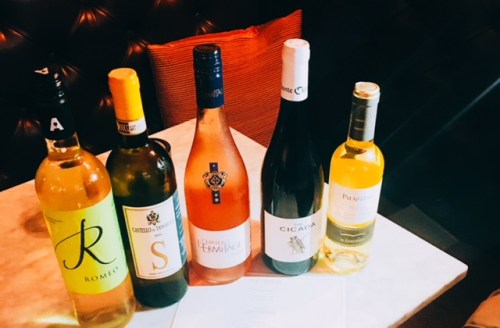 The first course, the chicken thigh taco, served with guacamole, strawberry salsa, whipped creme fraiche, didn’t come with a matched wine, so it was a good job we still had our margaritas to hand.  Despite an unusual pairing of avocado with strawberries, it actually added a fabulous dimension to this chicken taco.  Our only complaint and it became a common thread throughout the meal, was that we wished there had been more of each course.  The style is definitely nouveau cuisine, which is great if you’re watching your waistlines but if greedy diners, might leave you still hungry despite having devoured six courses! 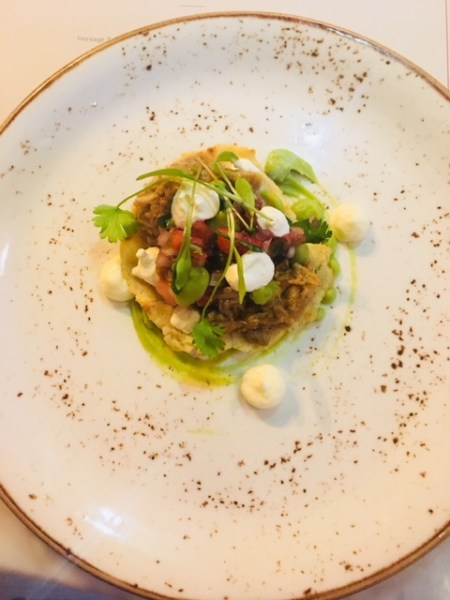 Chicken Thigh Taco – who knew that strawberry, guacomole and chicken would work – but it does!

If only there had been seconds of the second course

Second up was the nachos with Heritage tomatoes, housemade queso fresco (a Mexican cheese, traditionally made from raw cow’s milk or a combination of cow and goat milk) and an avocado gazpacho.  I swapped the matched wine, a Romeo Sauvignon Blanc from Spain for a Picpoul, which worked just as well, with the acidity of the wine cutting through the delicate sweetness of the tomatoes. 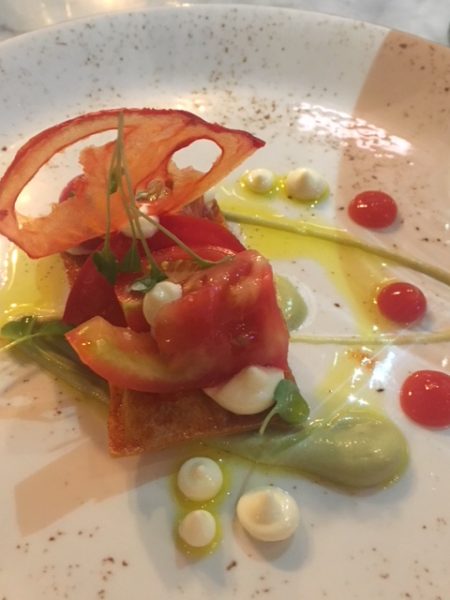 Next up was the Elote, Six by Nico’s take on Mexican street corn matched with a rather acidic, Gavi Spinoa from Piemonte, Italy. The menu described the dish as sweetcorn risotto, although I think there was an element of poetic license here as I struggled to find anything resembling rice, and was more yellow corn kernels, which were served with an unusual, green, meaty chorizo and pickled red peppers.  This dish had great textures, even if the risotto was missing, with a lovely crunch from the sweetcorn kernels. 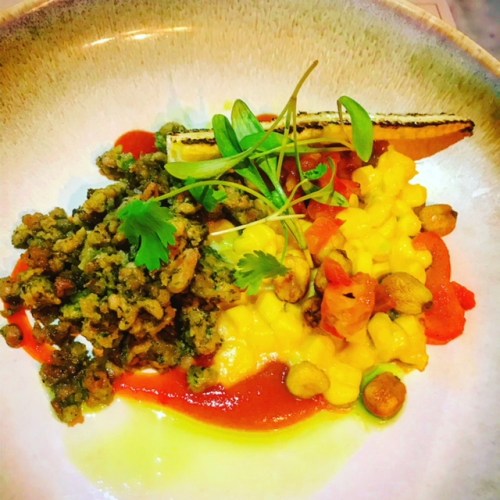 I passed on the Sea Bass Chilpachole Mexico and opted instead for the vegetarian alternative, two pumpkin tamales, served with sikil pak (a pumpkin seed dip not dissimilar to hummus), orange, and toasted pumpkin seed. The two crispy, pumpkin tamales barely touched the sides and I found this dish over-seasoned but at least I had some time to enjoy the deep salmon pink Rose, Costieres de Nimes from France, with its wonderfully fruity nose of ripe red berries. 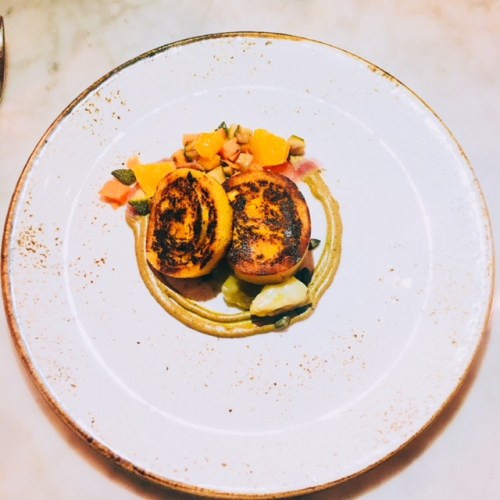 Pumpkin Tamales were my substitute for the Sea Bass Chilpachole Mixto 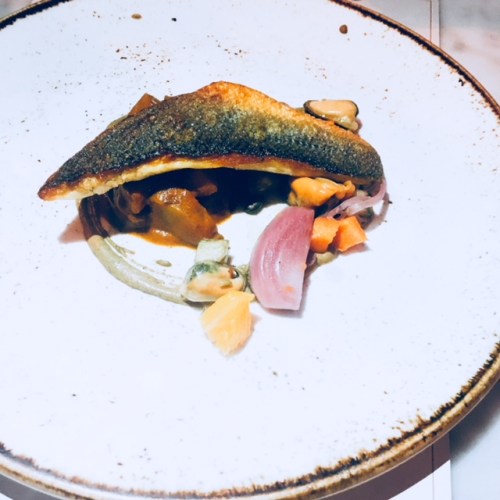 The fifth course, and by far my favourite, was the Pork Cheek Barbacoa, which melted in the mouth, with refried beans, tomatillo (the Mexican husk tomato), rainbow chard and crackling.  The toasted sweetcorn kernels, atop of this succulent meat, added nuttiness and texture to the mean. The red Cicada from Rhone in France, with its dark red cherry flavours with a touch of spice, enhanced this comforting dish. 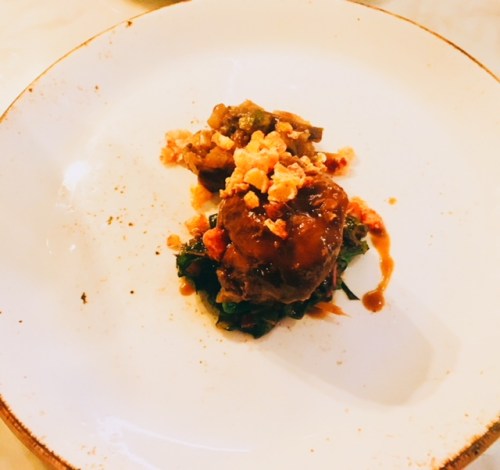 Finally a Chocolate Taco, served with Tonka Bean Ganache, banana ice cream, chipotle and banana caramel was the perfect finish, especially when served with a Moscato passito from Piemonte, Italy.  I just wished I could have had double the helpings though. 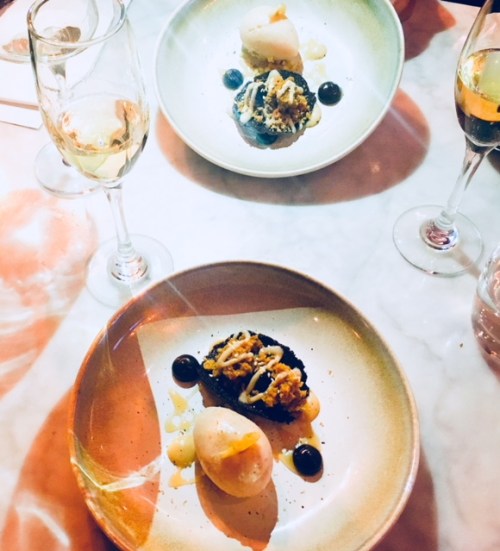 The Mexican menu is available until Sunday, 5 August.  At £28 a head, which is great value for money, with an optional wine pairing costing £25 a head, which we indulged in too, you really need to join the fiesta!