Roof Top Picnic at The Glasshouse

Who knew there was a two acre garden on top of the Omni Centre?

I’d walked past the amazing old stone church facade of The Glasshouse so many times over the years, and always admired the way its appearance blended both old and new Edinburgh. But I’d never crossed the threshold.

Until now: escorted through the grand foyer and up to the garden – only accessible by lift – it was quite an eye-opener. Tucked behind the current carnage of the St James Centre is a high end haven.

The Glasshouse is home to a manicured garden which looks out onto Carlton Hill and away down to the Forth. It’s a surprisingly peaceful spot, currently adorned with deckchairs and a Sipsmith cocktail bar. (Some lucky hotel residents have their rooms open directly onto the garden, which must have been a treat in the recent better weather.) 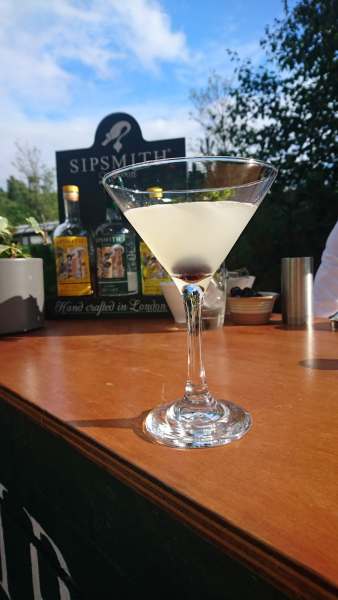 Whilst mingling, dining companion Elsbeth and I sampled both the cocktails on offer that night; one short, zesty affair made with a ‘lemon drizzle’ gin and another longer, fruitier concoction. Picnic experiences include two cocktails, or one mocktail and unlimited soft drinks. The hotel’s delightfully decadent yet cosy bar is not far, should further refreshment be required. 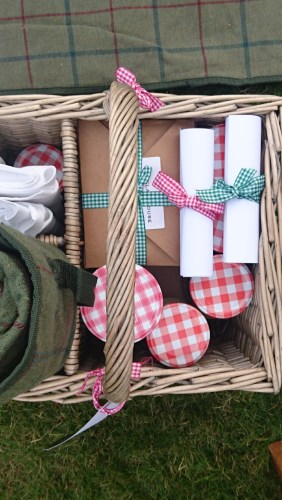 The rooftop picnic hamper at The Glasshouse

Presented with our baskets, ingeniously divided into sections, we were well equipped for our al fresco edible entertainment. Although deckchairs and low tables were available, we embraced the picnicking experience and whipped out the blankets: one plastic-lined and waterproof for sitting on, and one fluffy, for sitting under. Good attention to detail. We were also given plates and cutlery.

We then unboxed everything, much like unwrapping presents. As we plucked at cute wee gingham ribbons, it was clear the team have given thought to making their selection appetising. Inside we found an array of sweet and savoury eats, representing many a miniature picnic treat. 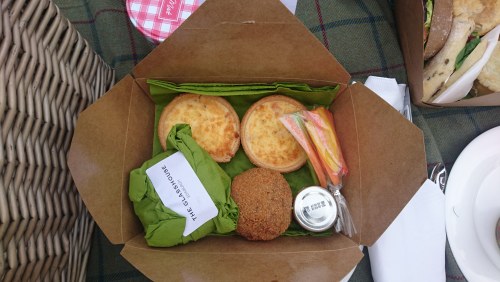 Low environmental impact has been considered, with liquid items in on-trend jars. However, although the jars were cool they seemed to make portion size variable. Where Waldorf salad fills up a jar, blueberry cheesecake is more compact, so the jar looks half full. 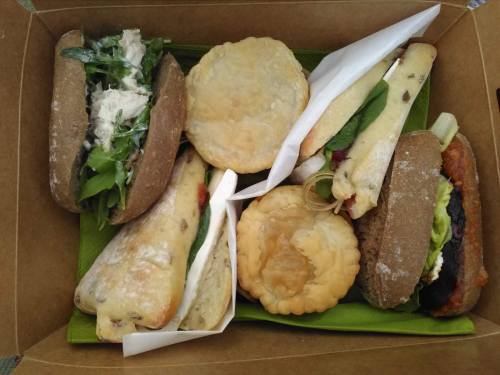 Other more solid things such as sandwiches came in compostable boxes, neatly separated. Baked goods made up the bulk of the picnic – and who could complain about that, especially when they’re homemade. We enjoyed freshly baked baguettes with chicken and rocket, or roast aubergine and tomato pesto. Here, the roll was easily the best part; likewise with the brie and cranberry in olive bread. 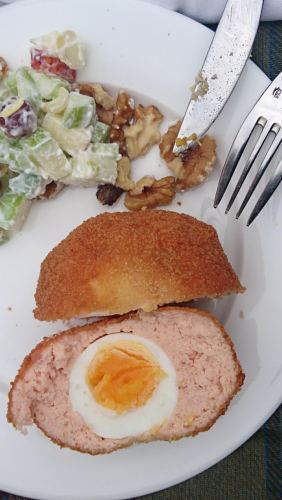 A huge Scotch egg made with either pork or salmon was outstanding; well seasoned, it was easily the star of the show. It also provided balance to an entirely bland quiche and an overly salty pork pie, which accompanied a selection of salad items including a jar of olives. There were also tiny sticks of pepper, carrot and celery, to dip in an equally tiny pot of homemade hummus – a rare culinary find, and highly enjoyable for it. 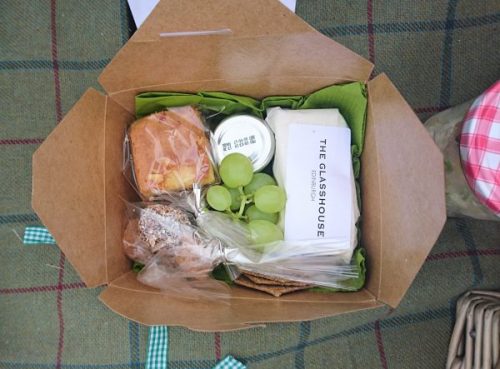 Cheese box with cake and grapes

A respectable cheese course comprised decent sized wedges of brie and smoked cheddar, nestled side by side in wax paper. From IJ Mellis, they were both delicious – despite a little flavour transference – especially on nice crackers, spread with homemade chutney. 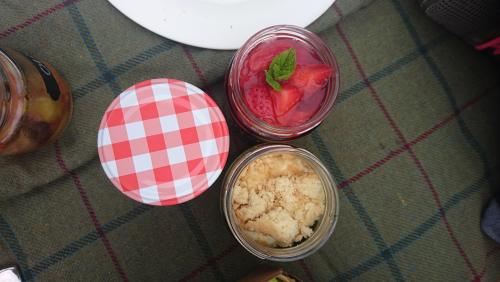 Dessert of jelly and cheesecake

Dessert was plentiful, featuring a soft Bakewell slice, an oozy cheesecake, aforementioned, and fruit jelly packed with seasonal fruit. The fruit was fresh and varied, making the jelly surplus to requirements in my opinion; I would swap it for a fruit salad. Lastly, there were macaroons and tablet, which we saved to enjoy with a coffee at the bar.

Overall, there was probably food enough to be equivalent to two generous courses. It represents good value for money, as you’d hope, at £85 for two. It’s true some tweaks are required, and staff will need to keep an eye on lurking seagulls, but I would recommend the rooftop picnic for its thoughtful novelty and quality of ingredients.