I was in a treat last week when I attended the Edinburgh Grand and the Register Club’s Inaugural Supper Club, in the splendour of its penthouse suite, with its amazing city views.  The first of these monthly supper clubs was hosted by Bristol-based chefs, Josh Eggleton, Head Chef at Michelin star gastropub, The Pony & Trap in Chewton Magna, and Rob Howell, Head Chef at veg-centric Bib Gourmand awarded restaurant, Root. 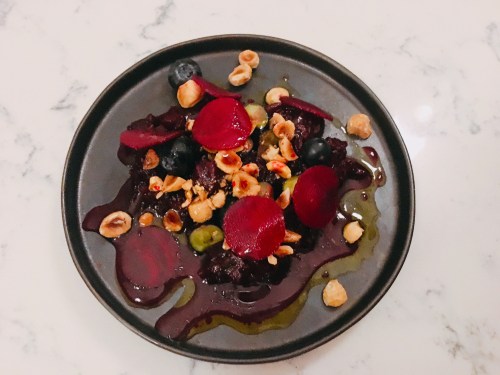 The star dish was a roasted beetroot, with hazelnuts, blueberries, and curd cheese

Held in the stylish elegance of this new hotel, located in Edinburgh’s historic St Andrew Square, the monthly Supper Club only takes a maximum of  30 bookings, giving guests an unrivalled access to the chefs as well as a rare opportunity to taste the acclaimed dishes of that particular chef/s.

The format of the Supper Club is simple, with guest enjoying a drinks reception in the beautiful surroundings of the Register Club, followed by a five course dinner with paired wines, in the exquisite setting of the classic but contemporary decor of the Games Room.

Whilst I didn’t stay for the Supper Club, I still had the opportunity to try the dishes and elements of the dishes (minus the seafood) that they were serving.  Prior to the Supper Club, the star chefs also put on a cookery masterclass in the hotel’s stunning penthouse apartment, which can be booked separately. 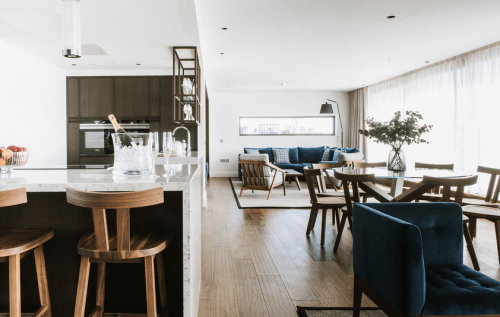 The Edinburgh Grand’s penthouse is the perfect, intimate venue for the chef’s masterclass 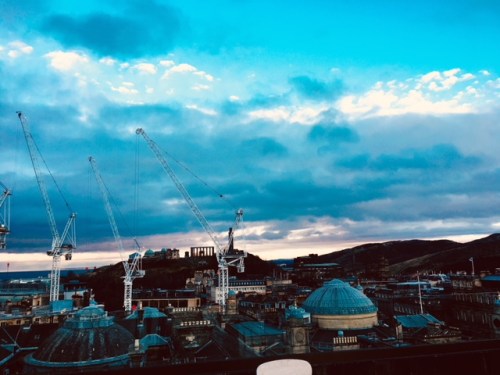 The masterclass shows participants how to prepare some of the dishes on the evening menu, as well as the opportunity to sample some of the dishes.  There was lots of interaction with the chefs, the opportunity to ask questions and mingle with the other guests and whilst the majority of us were strangers at the start of the evening, by the end, we left as friends, with a common interest of the finer things in life and great food.

Both the chefs certainly have some great experience and it was great to get up close and personal and taste their food.

Josh Eggleton and his sister Holly took over The Pony & Trap near Bristol in 2006 and the gastropub was awarded a prestigious Michelin Star in 2011, an honour which it holds to this day.The Pony & Trap has also been named as the second best gastropub at the Estrella Top 50 Gastropubs awards. 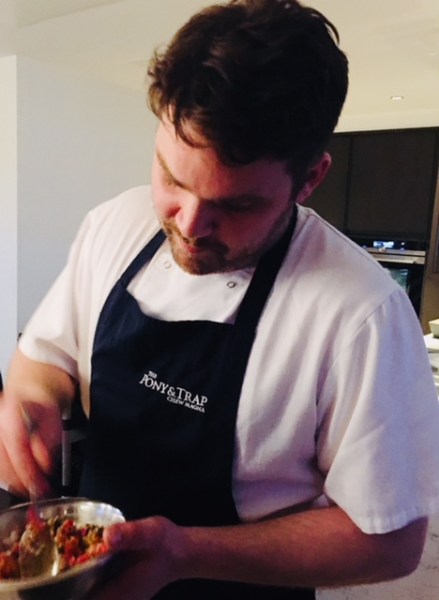 For three consecutive years Josh brought this passion for South West food to the masses with his appearances on the BBC’s Great British Menu. Competing with the likes of Dom Chapman, Emily Watkins, Jude Kereama and Chris Wheeler, Josh represented the best of South West produce while firmly placing himself in the public eye as one the country’s finest chefs.

Josh and Rob Howell helped to set up veg-centric Root in Bristol’s Wapping Wharf in 2017 and the restaurant was awarded the esteemed Bib Gourmand less than a year after it opened. Previously, Rob was head chef at Josh’s Michelin-starred pub The Pony & Trap, but now runs Root, with his girlfriend Megan Oakley covering front of house. Rob has also worked at Ondine in Edinburgh and Goodfellows in Wells, as well as completing stages at esteemed restaurants such as Studio in Copenhagen, Elystan Street and Restaurant Nathan Outlaw.

Whilst many of the dishes were seafood based, I was still able to appreciate the thought that had gone into each dish. The focus of their food were small plates, with the focus very much on using just one or two ingredients and letting them shine.  It was also lovely to have the opportunity to ask lots of different questions, and whilst I couldn’t eat everything, it was still possible to sample different elements of the dish. 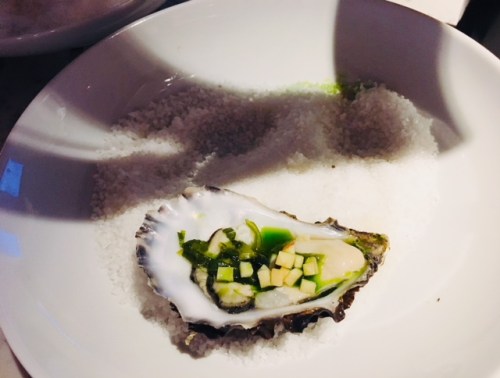 The dishes on offer included:  Loch Fyne Oysters, with leek oil and diced apple; Steak Tartare using South West beef served on a home-made sour-dough cracker, topped with eel and a fresh nasturtium leave; a spiced cauliflower pakora on a cashew butter, topped with a pickled blood orange; poached haddock arancini balls, with grated Old Winchester, which was a great alternative to parmesan; and farmed sea bream, thinly sliced, which had been cured in Cornish sea-salt, and then dressed in dill, pickled and salted brined cucumber and gherkin, served with the most amazing caper and raisin puree. I’m indebted to Rob for sharing the recipe with me. 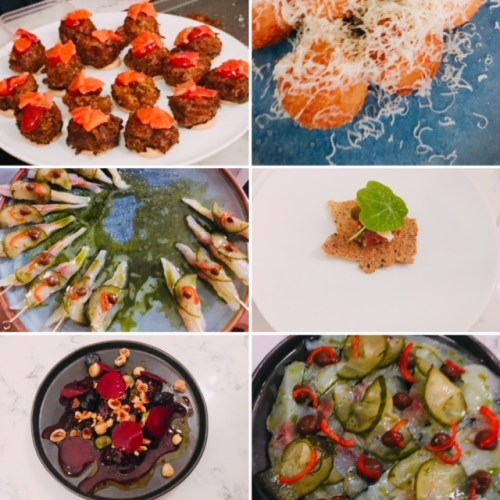 My favourite dish of the evening was a dish inspired by one Rob told us is served at the Studio in Copenhagen. Rob’s take on the dish uses roasted beetroot, served with blueberries, a curd cheese, roasted hazelnuts, finished with a seaweed oil.  The different flavours and textures worked so well to give a wonderful umami taste. 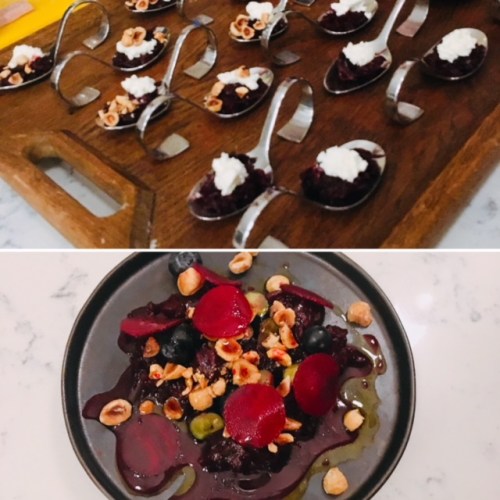 A beetroot, blueberries and curd cheese small plate had the umami factor

Book your tickets now.  Tickets for The Penthouse Social cost £25 and tickets for Supper Club cost £95 per person.