When the hoardings at the corner of the Royal Mile and Bridges went up, I had never heard of Byron. When, a couple of months later, C. and I decided to meet after work for a quick dinner – some days, neither of us can be bothered to cook – we recollected that the restaurant was now opened and decided to visit. What followed was interesting in several ways. 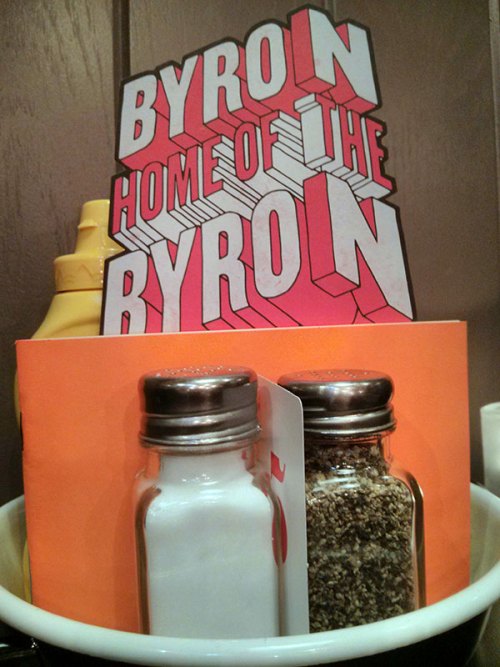 Gimme me the pickle!

At Byron, a cheerful woman who found me a seat and took C’s name so she could direct him when he arrived informed me that there are now two restaurants in Scotland, one in Glasgow, one in Edinburgh. A second one is opening in Edinburgh shortly. I like burgers, not to the extent that I actively track what’s new and where, but I have noticed an increase in burger joints across Edinburgh over the last few months.

Burgers, when they are good, are satisfying. Their trashy reputation, the confusing associations of sun-kissed barbecues and Macky D’s, doesn’t detract form their appeal. There’s something about grabbing a big bun, squeezing it just so with pinkies and ring-fingers in an attempt to keep the content in when you bite down. I’ve learned, over the year, to lean over my plate to let it catch whatever trickles out at the back: burger, dressing, tomato.

I get ahead of myself.

The new restaurant is over two levels: the front, upper level is classic American diner, adapted to today’s UK. Downstairs, where you get a peek into the restaurant, it has a slightly different feel. C. and I sat in a banquette, with a view of the restaurant, but apart enough to feel that we were in our own cosy world where ketchup is allowed and mustard comes in squeezy bottles instead of glass jars.

We were hungry, tired and a little fed up after a long day’s work. So, to raise our spirits, we decided to share nachos to start. C. had been experiencing nacho cravings on and off for a couple of weeks, and this seemed as good time as any to satisfy that particular hunger.

The nachos were generous, with more sour cream than anyone can possibly need. They were good. The chips weren’t up to the thin, just cooked ones you get in the States, but they worked very well for shuffling tangy salsa, creamy guacamole and thick cream into our faces. 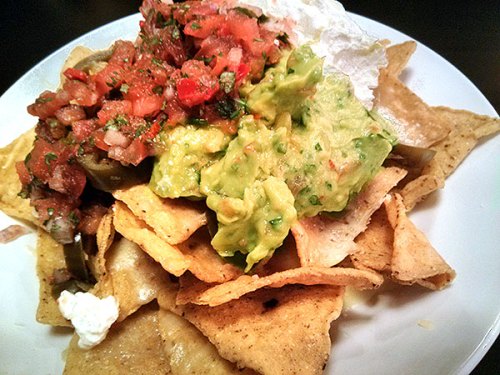 Sometimes, we get serious nacho cravings.

When we’d finished our nachos we’d allayed most of our hunger. That was a bit of a problem for me since I had ordered the second largest burger on the menu: the B-rex. A beef burger in a bun, lavishly enhanced with jalapeños, an onion ring, bacon and cheese. I nabbed C’s pickle and we were set. Using my special grip, I hoisted my burger and bit down. Mayo and half an onion ring promptly fled to my waiting plate.

Meanwhile, C. was tucking in to a bean patty – with pepper and aïoli – and skin-on chips. He washed his down with ginger beer, the downside of having the car with us, while I enjoyed a can of Beavertown Holy Cowbell India Stout, selected entirely on the name. All the beers come in tins, it’s a Byron thing with a good reason I didn’t memorise.

As well as the burger, I had ordered courgette chips. They were yummy and completely unnecessary. Sometimes, courgette chips are shoe lace style, very thin strips dunked in flour and deep fried. These were thicker, the size and thickness of fat chips, and dipped in buttermilk and flour before frying. 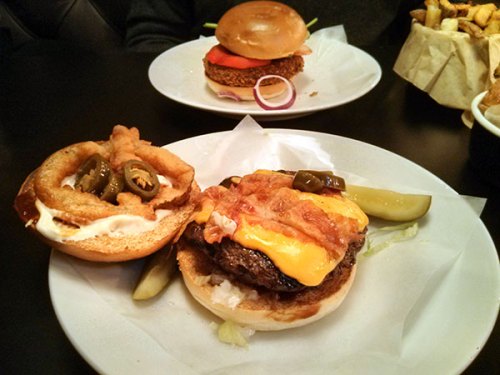 Vegetarian burger in the back, the B-Rex at the front.

What is a boilermaker when it’s at home, then?

Byron’s not just about burgers, although proper, juicy burgers is their main focus. They also have a selection of salads, and, something I like – not because I have a problem with carbs or gluten but because I like burgers more than buns – a bread-free version served with salad. We tried two types of chips: now, there’s also fries and sweet potato fries for when you’re too hungry for just a burger. If you want veg, there’s always the iceberg wedge with bacon and blue cheese dressing. To keep you keen, Byron has a different special burger and milkshake every month.

They also serve milkshakes, with or without alcohol, and boilermakers. A search around the menu found that this is a beer and a shot, specifically, a shot of bourbon. On the night, beer was plenty for me. On another night, a simple cheese burger would have been enlivened by a tin of lager and a shot of Buffalo Trace. The servings are large, so I recommend you keep it simple. Like Byron does.

Byron supports One Feeds Two® in the movement for happier meals – providing over 250,000 school meals so far for children living in some of the poorest parts of the world… and counting!

Each time you buy a Chilli hamburger, Byron provide a school meal for children living in some of the poorest places in the world. It costs just 25p to provide a whole school meal which encourages school attendance and could improve their prospects in life. You buy a special, they get a school meal. It’s as simple as that.