Burger @ Shandwick Place: More Than a Chip Off the Old Block

The first time I ate at Burger, I wasn’t convinced. I had the chicken katsu burger, which was a great idea in principle. But in reality the tonkatsu sauce (a fruity Japanese sauce) made the breaded chicken soggy and it just wasn’t a patch on the lovely grilled chicken of somewhere like Holyrood 9A. However, this time round my experience at Burger was far better. I visited their second restaurant in Shandwick Place. 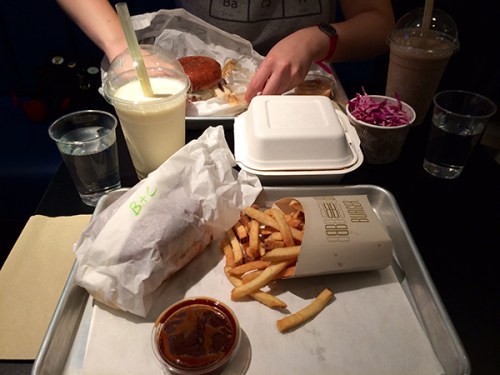 Burgers, chips and milkshake too. 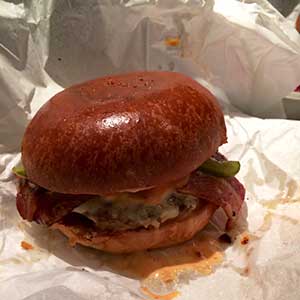 Look at the shine on that roll!

I quickly learnt that previously my mistake had been simply not ordering a regular beef burger – this evening’s beef patty was the standout element of the meal. It was well-made, well-sized and well-seasoned. Its texture was excellent and it was not over- or under-cooked, just slightly pink in the middle.

I had one of the daily specials, a Saltimbocca burger, which was made with fresh sage and wrapped in prosciutto. It nestled in mozzarella. It basked in a Marsala reduction. It rollicked in mayo, whilst languishing under a layer of fresh tomato. Oh yes! The only thing that was slightly off-key were its deep-fried capers. They came as a strange surprise, a rather too tangy burst in the middle of a rich, creamy, deeply savoury experience.

Let’s not forget though, a burger without chips is like a guitar without strings. Better get some then. And since I’m all about ‘in for a penny, in for a pound,’ I’ll have them covered with cheese. Wise move. It’s safe to say they were the best chips and cheese I have ever tasted. The fries themselves were skin-on, skinny-cut and deep-fried just enough to give them crispy edges without leaving the middle of the chips oily. And the cheese was spot on too: a mature, salty cheddar, melted to perfection. 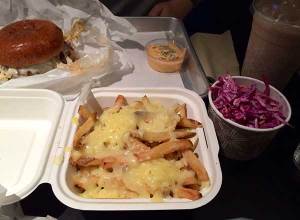 Chips & cheese and coleslaw. Soothing on a cold night.

Oh, but there’s more to come. I also had house slaw, which consisted of some very finely chopped red cabbage and a little carrot. As a dairy lover though I felt there wasn’t enough mayo, especially to balance the vinegar of the dressing. But the crunchiness was a much appreciated contrast to the other textures of the meal.

Burger, chips, slaw. That’s quite enough, surely? Oh no! Burger’s other specialty, besides its namesake, is the humble milkshake. I think these days milkshakes are fairly ubiquitous and so I have standards: they must be thick, fresh, not too cold and not artificially flavoured. I ordered the chocolate shake with the addition of peanut butter (in for another penny, right?) and waited hopefully. Phew. Burger ticked all the shakey boxes. The peanut butter worked very well too, taking the edge off the chocolate’s sweetness without being cloying or too salty. Slurp. 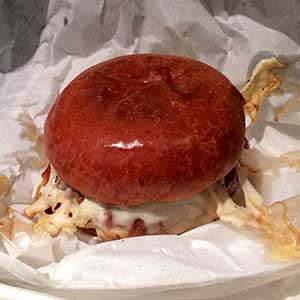 So a final word on the place itself. Burger is very of the moment. You order and pay at the counter, then a buzzer sets off a mini disco when your food is ready to collect. Everything is served in Vegware compostable packaging to minimise environmental impact. (Personally, I’m uncertain of whether this is more sustainable than reusable tableware.) The décor is in the current fashion of minimalism, with exposed pipes in the ceiling, visible filaments in the naked light bulbs and metallic chairs at dark tables.

On the night of my visit Edinburgh was displaying its commitment to dreich and the omnipresence of silver furnishings made the restaurant seem cold; not a place to go for a meal with friends. But I feel the weather unfairly influenced that. On a busy weekend I expect the place would be abuzz with voices engaged in happy, burger-based chat.

Overall I would recommend giving it a go. There are many great burger places in Edinburgh, and the self-titled Burger is a fine addition. Just stick with the beefs.

Amy ate at the restaurant at the invitation of Burger.