It’s amazing that after 17 years of living in Edinburgh I am still finding places that I haven’t tried or visited before. In my continuing quest to find 50 new places to eat/drink each year, I visited The Queen’s Arms on Frederick Street for their ‘Wednesday Night Meat Up’. 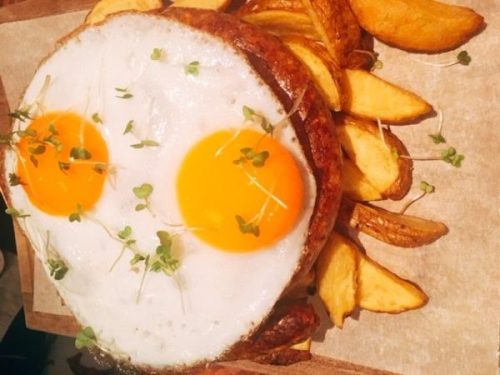 A good excuse for a long overdue catch up with Lizzy and an early birthday celebration, this downstairs bolthole on Frederick Street, prides itself on being a pub for locals and visitors alike.

Initial impressions once I’d waded through the smog of the smokers outside, was a quirky pub, steeped in heritage.  Customers ranged from the after-work drinks crowd, an older crowd of tourists, and the table behind us, a couple who hadn’t caught up for 10 years!

Book-lined walls, squashy leather sofas and the walls adorned with old paintings and references to Mary Queen of Scots, mix with new age technology of large screens, showing sport. Slightly incongruous and probably not my first choice for a mid-week catch up. 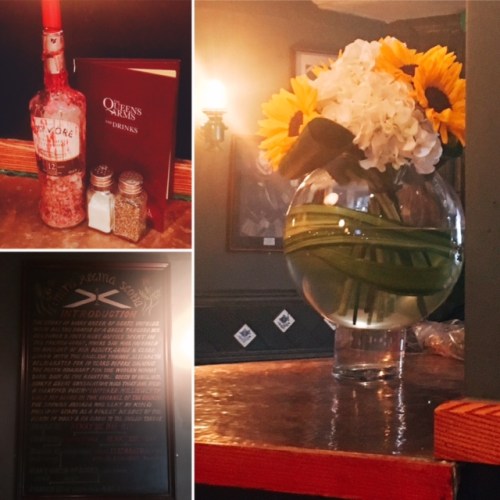 My dining companion and I were shown to our table, a quirky booth for 2-4, with its own gate. The dining area is separate from the main copper topped bar, with its impressive array of spirits, ready for making cocktails and local cask ales, plus all the mainstream options on draft.

I was quite excited by the prospect of the Wednesday Night Meat Up, which I had assumed was their meat platter (£17), described on their menu as a sharing platter of Aberdeen Angus Steak, Haggis Lollipops, Confit Duck Salad, Toasted Granary, Homemade Brown Sauce and Apple Caramel. Unfortunately it wasn’t.

What we were offered on the night, was a giant Cumberland sausage, served with two duck eggs, and a plate of hand-cut chips, with a small glass of house red (Merlot) or white (Vigonier) or a pint of beer each.

Whilst it filled the spot for two hungry girls, the issues arises from the fact that there isn’t a choice on offer of the sharing platter and it was only when we were ‘trapped’ and seated in our gated booth, that we were actually told what the ‘meaty platter’ was. So it relies on you both liking the same thing and fortunately for us, both of us were not adverse to a pork sausage this evening.

Our waiter said the meaty platter changes and alternates between chicken wings, bavette steak and spare ribs so I suppose if any of those take your fancy, you’d need to check in advance before you sit down or you might be disappointed.

As a dish, it worked but the addition of some vegetable sides might have elevated it to another level, for example some asparagus (in season) to dip in the eggs or some coleslaw or roasted sweetcorn.

Where they get you with this type of offer, is that one small glass is never enough, so you end up ordering another one, which we did – and this time a large one.  So the initial good value for money, never really ends up being such a good offer after all.

We declined desserts as I’d had enough of the background sport on the telly and headed up the road for one last drink (well bottle) at All Bar One on George Street.

I was interested to see they have a similar sharing theme – ‘Tapas Tuesday’ but in this offer you get a choice of four sharing platters and a whole bottle of wine, rather than a glass, all for £20.  You can even upgrade the house wine to one of their selected ‘must-try’ wines for another £5.

In fact, there are no shortage of these type of offers around town, so if you’re up for a sharing mid-week night catch up with a friend, you might want to shop around. 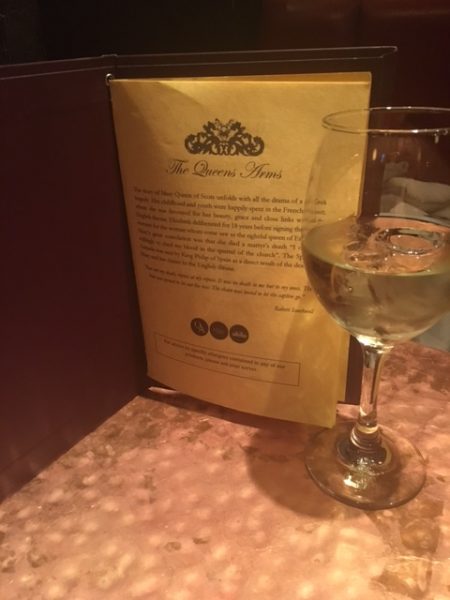 The Queen’s Arm loves its history

Would I revisit the Queen’s Arms? Yes but it’s more likely to be with a group of friends when a rugby match is on for pub grub and the game, or even for their Sunday Roast (£29.50 for two), rather than for a catch up with a girlfriend, unless she’s a massive sport enthusiast.

Kerry ate as a guest of The Queen’s Arms