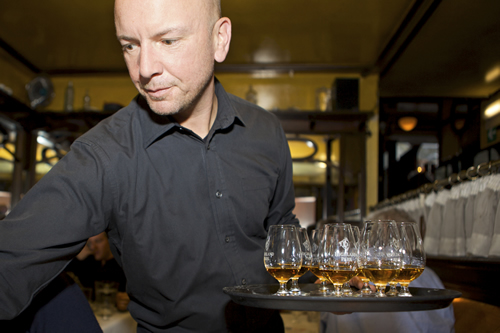 As part of the  Slow Food Chef Alliance founded by Slow Food and Highland Park, Neil Forbes regularly hosts Slow Food events. I recently attended a Slow Food week  event where we sampled glorious three different whiskies from the distillery. A 12 year old; the wonderfully named Thor from the Valhalla collection and my favourite the 18 year old. Each went so well with the dishes, but I must say that the combination of the 18 year old with a ginger cheesecake with heather honey was inspired!

Prior to the Slow Food meal, I got a get a great insight into the style of dishes that would complement the whiskies at the Slow Food Dinner. 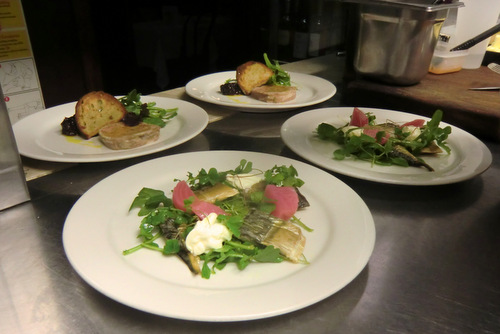 It’s all about Sustainability

In November 2010, the title of my blog post about Neil Forbes restaurant at the time was The most seasonal restaurant in Edinburgh.  At that time, seasonality was becoming more important to chefs and now it’s almost a given that chefs will emphasise their use of local produce.

Neil, Chef of the Year 2011 and now at Café St Honoré has taken this one step further. His restaurant was the first awarded a star rating by the Sustainable Restaurant Association and now wears badge with pride rated highly for its performance in 14 key areas Society, Sourcing and Environment. And we hear that a very well known Edinburgh chef has been asking Neil for tips! 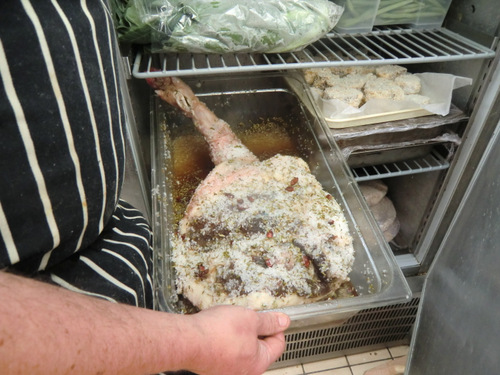 What you notice first when you walk into the kitchen at Café St Honoré is its size. It’s certainly not spacious. Every square inch is put to good use. Pride of place are the recycling bins of many types. “Absolutely everything is recycled wherever possible”, Neil explains. “We’re down to 1 half bag of waste each week which is great for the environment but also for us as we’re not paying for waste to be removed.  My chefs weren’t convinced at first, but now it’s second nature”. I ask (tongue in cheek) when we might see Neil filling his trusty motorbike with recycled oil? Soon we hope.

A passion for ingredients

Considering the small space, you might think that Neil’s enthusiasm for doing everything from scratch might have to be curbed. But no, there’s the bacon hanging from the ceiling; parma ham part through the curing process, gently soaking a spice and salt mixture. There’s several types of sour dough starter and the mixer near the back door is kneading the latest batch of bread. Outside the back door in a space no more than 2 metres square is a fledgling garden of vegetables and herbs and even an apple tree! 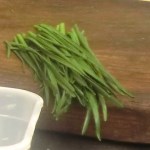 Neil’s passion for local foods extends to foraged foods too. Today there’s wild sorrel in a salad; wild garlic stalks in one dish and new to me, something his forager Ben calls Beach Coriander. Looking rather like flat chives, this has a delicious coriander taste with a hint of citrus.

Despite our city’s chefs’ passion for local produce. It continues to be a challenge to source some ingredients. Tomatoes are a particular challenge since J M Craig’s retirement. Sadly no one took on the business and tonight’s tomatoes are all the way from the Isle of Wight – none to be had from a source any closer. Another issue is deliveries. When space is at a premium you need to buy regularly and often and many of the suppliers are only able to deliver once a week. Surely an opportunity for a business there collating and delivering produce from all over Scotland? A man after my own heart, Neil does love using butter in his cooking. He’s on a quest to discover butter as tasty as that you get from Normandy as are many other chefs I’ve spoken to. 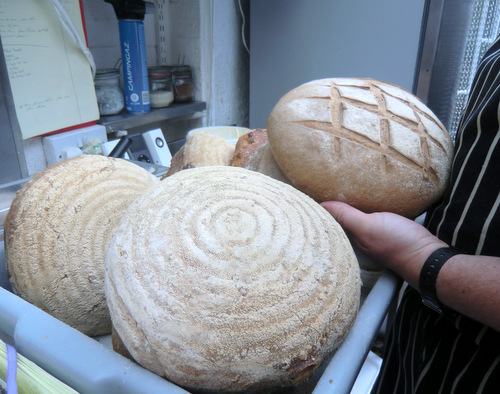 Whilst we’re chatting his chefs are busy preparing the first orders of the night. One is on his first day and is working on the starters. Every so often Neil pops over to discuss how best to plate something or to make slight tweaks. Another chef is busy making Rouille adding some mashed potato so that when it is used in a particular dish, it doesn’t collapse as soon as it’s put on the plate. The third chef is going through the day’s invoices and checking the rota for the next few days. The only loud noises are from the KP washing the dishes. It’s a calm friendly kitchen. 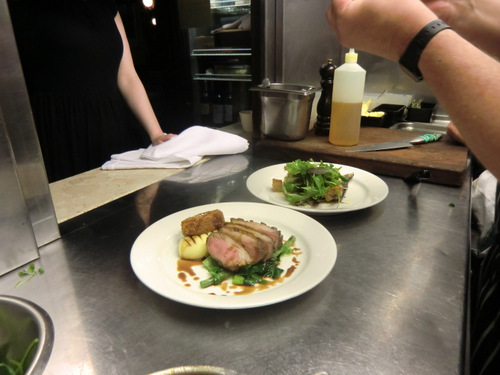 Neil explains that rather than offer amuses bouches or fancy flourishes, the focus is all about the ingredients transformed into very tasty dishes. There are a few menu items that nod to the restaurant’s French name and I think that the ambiance in the restaurant is very much like a good French bistro, relaxed, friendly, unhurried. The décor is stunning. The food is delicious, comforting and very more-ish.

All too soon it is time for me to head home. What a thoroughly enjoying evening talking to someone who is so passionate about what he does. The next morning Neil was off to the Botanic Gardens to cook a foraged breakfast with two of his former chefs Dale Mailley and Edward Murray who will open the Gardener’s Cottage Restaurant soon. Thank you Neil!